Monads are a simple concept, but is made unreasonably hard to learn partly by tutorials featuring weird analogies and partly by Haskell-specific cruft. In this post, I promise not to use any analogies, and we'll get rid of all the cruft by inserting this directive in the top of our Haskell file:

There, we got rid of the standard library and are left with a blank slate. We'll need the RebindableSyntax later on for using do notation with our own monads. For example purposes, we'll keep a few things from the prelude:

We can now forget about applicative functors and other funny sounding concepts, and focus on defining monads as they would look given none of the cruft. Here it is:

You'll notice there's no >>= operator. That's because it's not central to monads, but rather just a combination of join and fmap. In fact, here's the definition:

Notice that it's not part of the Monad type class. It's implemented as a stand-alone function for all monads at once, right there. You'll never have to implement it again. The do syntax is syntactic sugar for using this operator, eg:

It would be strange to try to understand >>= without first understanding join and fmap. Yet, that's how monads are usually introduced! But I digress, let's look at an example.

The Maybe instance of monads

join takes a Maybe (Maybe a) and peels off a layer to get you Maybe a:

fmap applies a function to the contained value (if any):

This instance is often used to process multiple values that may be Nothing, and returning Nothingif any of the values are Nothing. As a very simple example, here's a function that adds two numbers if they're not Nothing:

Eg. addMaybe Nothing (Just 42) is Nothing because one of the arguments is Nothing, whereas addMaybe (Just 1) (Just 2) is Just 3 because both arguments are Just.

With this definition of monads, implementing the list monad instance is also quite simple:

The list instance is often used to generate the Cartesian product and then apply a function to it. Here's an example:

The IO instance of monads

Purely functional programming languages like Haskell have a problem. How can one write to the file system and otherwise interact with the world, if there are no side effects?

You might come up with the following solution: Simply have the main function take in the world, do stuff to the world like writing to files, and then return the modified world! If it worked that way, you could copy a file like this:

That is, every time we want to perform I/O, we take in the old world and return a new world, which can in turn be used in the next call. It's a bit verbose, but that's not the real problem. The real problem is, what happens if you use world1 more than once? The first time you use world1 and get a new world world2 back, world1 is no longer valid. In order to prevent people from using world1 twice, we can hide functions like readFromFile :: World -> (String, World) away inside a data type. Thus, we create a data type that represents all such functions and call it IO:

In order to avoid accidentally reusing spent world, we need to stop manually passing around World values. Fortunately, monads can help us combine IO operations without doing that:

In return, we simply return the plain value paired with the unmodified world. In join, we return a function that performs the outer layer of the IO (IO a) effect first, and then perform the effect of the inner layer. In fmap we just apply the supplied function to the result of performing the effect.

Finally, we only give access to construct IOs given a function World -> (a, World) to a select few operations (readFromFile, writeToFile, etc.) in the standard library, and then we carefully and manually verify that those functions don't ever attempt to reuse a spent world. Together, these operations define what kind of I/O you can do in the language. Every other I/O library builds on top of this. The main function is thus:

And we can use the do notation to make our I/O look like an imperative language:

Quite a bit more readable too!

Back to the real world

The fmap is useful for things beyond monads, so it's actually part of another type class called Functor, which is a superclass of Monad. Monad recently gained another superclass called Applicative. Once you have implemented the Monad type class with >>= and return, you can simply use the generic definitions for Functor and Applicative found in this list monad example:

The Monad type class from the standard library also has a fail method, which you can use to change what happens when a pattern on the left of a <- fails in do notation. This doesn't really have anything to do with monads, and you should usually not provide your own implementation of fail.

When implementing your own monads, make sure they adhere to the Monad laws.

Eventually, you'll run into monad transformers. If this article gathers enough interest, I'm planning to do a follow up on those.

Thank you Michael & Ramon for your input on this article. To everybody else, if you have comments, catch me on Twitter! I'm @Continuational

In the last post, we saw how to implement colorless async/await via effect inference. In this post, we will extend the solution to solve a common problem in web apps, where requests continue on even though the response will never be used. It's like a memory leak, but one 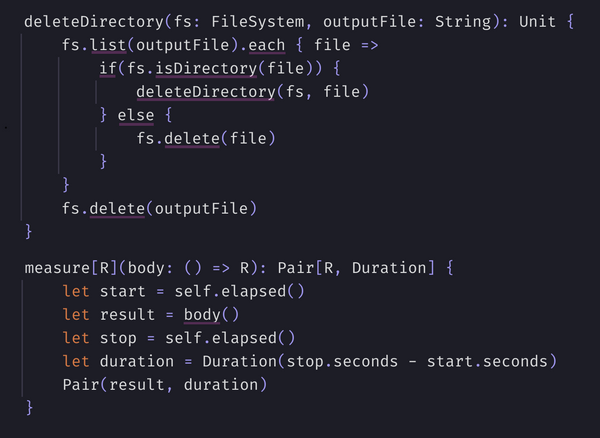 Firefly is a new general purpose programming language that tries to achieve convenience and safety at the same time, by using pervasive dependency injection. There is no global access to the file system, the network, other processes or devices. Instead, you access these through a system object that is passed